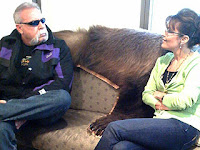 It's official - Sarah has jumped the shark. From People:

Turns out the hockey mom is also a motorcycle maven.

"It means so much to the state of Alaska that these guys are building this bike that will honor statehood here," Palin says in the episode, airing April 30 at 9 p.m.

Paul Sr. hangs out with the Governor in her office and talks about the Alaskan weather, snowmobiling and fishing in the summer. "I inherit whatever [husband] Todd rejects from the year before," Palin says.

After inviting the OCC crew back for the summer months, she suggests having fun Alaska style, saying, "We'll ride the bike to the fishing hole."

Although initially nervous about the meeting, Paul Sr. says that he felt Palin was "a real down to earth person to talk to."

From Alaska, the OCC crew heads to Finland in an effort to market their bikes overseas.


And American Chopper jumps the shark as well....

Man - how long has it been since I put one up. I did vacation, I got busy, work got REALLY busy. Ok - enough excuses. Check this out - was out with the family (sans son) looking for a graduation dress (that's right - for my daughter. You are so smart!). Well, in the Carson's junior section, the flat panels were playing videos to set the hipster mood of the department, and this came on. One must respect Battlezone:

London called - they don't want to be associated with you.

So the teabaggers did their goofiness yesterday, and boy, are they some inventive "citizens". And I use that term loosely. They are more just sore losers. They seem to think they can change the world. I guess being in charge and destroying this country for the past 8 years wasn't enough. And taking the blame certainly isn't their....er.....cup of tea. I really didn't intend that pun. Honest.

No, actually the previous president and his domestic policies did that.

I guess you are being taxed out of spell check software too, huh?

That's not right. Nor is that. That's REALLY not right. Teabaggers seem to be racist.

You are mad at the plan for recovery, but you made no plan for your sign.

Here's a really surprising sign to see at this thing.

You are two. You don't pay taxes. And your parents are represented. Maybe you need smarter parents that know just how a democracy works.

Hmmmm.... as opposed to holding hands and making out with the dude.

So I assume you are wearing a "I ♥ waterboarding" shirt. It's just hidden by the sign.

You did see him cry, right?

Then he wants to set a man on fire:


Glenn - check your med schedule and any possible interactions between them.