Ok - technically this is NOT a file from YouTube. Sue me, alright! I just really really like this video. It's simplistic. It's hip. It has a Lucas Film t-shirt. It has famous people, like Tim Meadows and Will Farrell. And it's just plain dumb. Put all that together and you have brilliance! The back track is a song from Beck called "Timebomb". Now, I hate Beck. Just don't get the wonder that he is. But I do like this song. Ok - I'm just babbling. Here's your video:

I think it's time for my first regular feature here at SALS. I thought how witty "YouTube-sday" sounded and decided to go with it. Didn't see it anywhere - made it up myself. If you already have the idea - thanks for not suing me. If not, and you take it without proper compensation, you will hear from my lawyers. :) Let's cut the chatter and get to the first weekly YouTube video:

I saw this online at UniWatch yesterday: 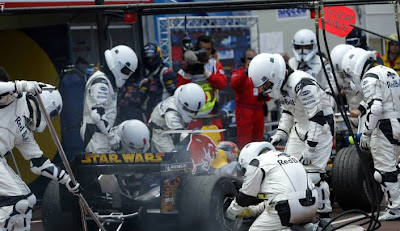 Gotta find one of those helmets... 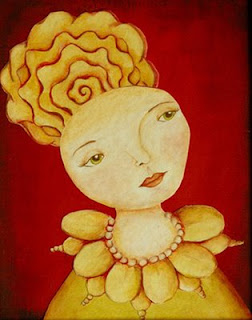 Just a quick little post about a friend of mine. More a friend of my wife, since they have known each other for almost 30 years (and both of them will kick me for mentioning that length of time). But they met when they were each -11 years of age, so that's okay. :)

Debbie Egizio is this very talented friend and artist. She used to work for County Sampler Decorating Ideas, but they stopped producing that magazine. She recently took her passion for art to the masses by opening "The Beat Of My Art" in downtown Naperville, near the train station. I highly recommend a visit - art from about 15 local artists and art classes taught by Debbie. You have to really see her artwork to get the experience of it. Deb will soon be seen on HGTV for a couple segments in their "That's Clever!" show.

And if all that isn't enough, Deb is just an all-around great person. Kind, considerate and caring with a general love for people and to help.


(Did I say that right Deb? Can I have my toys back now?)

Can you spare a Dollar? 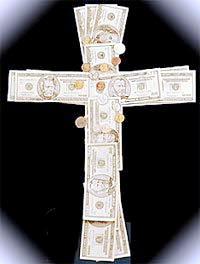 I've been meaning to get to this guy, but I have just be a little busy to blog. But no more - time to speak my mind about a certain someone. Before I say my peace, though, allow me to state this: for those that read, you see me messing with the SnapShots feature to be funny in my posts. Well - while I will still do that here, I will not link to anything kind or "real" concerning this subject, as I think he and his organization is a total sham. I do not want anyone to be lured into his false words and false promises, when those promises are said to only line his designer suit pockets with wads of cash.

So, who is this man I speak of? It's television evangelist Creflo Dollar. And yeah - that is is real last name, though I would like the time to do research and determine when his father changed his last name to that. Good ol' Rev Dollar is the head of an unfortunately popular church in the US. Membership is the tens of thousands. The have locations in Georgia and New York and does relief work in other countries. Not so bad, right? Helping people and such.

Oh - I know. I forgot to mention that Creflo and his family own 2 houses and a couple Rolls Royce vehicles. The "church" owns a private Lear jet to fly Creflo to all the places he preaches in the world, and there are a couple more planes as well. Creflo likes to preach that God wants us rich - that is our destiny. He loves to quote verses in the Bible that "confirm this", like the time he was on Larry King and quoted Proverbs with "he makes it very clear in proverbs, the blessings of the lord maketh rich and addeth no sorrow. See, Larry, we also believe in the gospel of prosperity that god wants you to be successful in every endeavor of your life. " Nice words, Creflo, but I have a wacky idea. Let's NOT take Proverbs 10:22 out of context and read the whole chapter, shall we? And forgive me, but I can't read that whole KJV, so let me quote it in the NIV. Well, Proverbs 10:2-3 certainly takes the rich to task: "Ill-gotten treasures are of no value, but righteousness delivers from death. The LORD does not let the righteous go hungry but he thwarts the craving of the wicked." Ouch, Creflo. You must have taken that out of your church's Bible, right? Verse 16 has a little wealth spanking too: "The wages of the righteous bring them life, but the income of the wicked brings them punishment." And the word "wealth" there does not refer to cash but to the benefits they gain.

Creflo's Bible also must be missing a couple pretty well known passages about wealth, that really talk of the same story, the rich young ruler. Matthew and Luke tell the story of a rich man that wishes to follow Jesus and enter the kingdom of God. He asked Jesus how this was possible and Jesus told him to sell his possessions and give all the money to the poor. The ruler was saddened and just walked away. He choose to serve his money and not serve the Lord. Just before this story, Jesus told his small group that man must choose a master, God or money. It is impossible to serve both. From a personal standpoint, I can tell you how true this is.

So if Creflo's desire to be rich doesn't tip you off how much of a false prophet he is, maybe a little visit to his website will slam dunk his beliefs. For starters, it sure talks a lot about money. To the point that the FAQs ask if members much show a W-2 to become a member (no). But still - what church in the world needs to state this???? But a very interesting thing in the church's statement of beliefs is this little nugget: "At World Changers Church International we believe: …in the indwelling of, and baptism of, the Holy Spirit with the evidence of speaking in tongues." Oh man... I have to speak in tongues to filled with the Holy Spirit? Seems like Creflo is talking about 1 Corinthians 14, which talks all about speaking in tongues. And yeah, there is a TON about tongues in there, but Paul is talking about how useless it is to speak in tongues unless someone can understand what is being said. I think Creflo must have lost a few pages prior to chapter 14, because in chapter 12 we read about all the gifts the Holy Spirit will give to believers and says "To one there is given through the Spirit the message of wisdom, to another the message of knowledge by means of the same Spirit, to another faith by the same Spirit, to another gifts of healing by that one Spirit, to another miraculous powers, to another prophecy, to another distinguishing between spirits, to another speaking in different kinds of tongues, and to still another the interpretation of tongues." So I guess if I get the gift of healing, I am going to Hell (according to Rev. Moolah). Com'on tongues!!!!

I left the best part for last. There is an investigation into a few church's financial dealings headed by Senator Charles E. Grassley. Creflo, who has "nothing to hide", refused to comply with the request and even stated that a subpoena would be needed to get that info, something that Grassley found disturbing.

So how does Creflo sleep at night? I thought so. 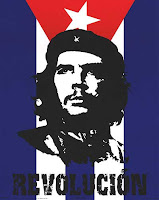 Alright, so here's the rest of my desired changes for 2008. Ya know - after my first post on the New Year, I heard on the radio one should not have more than one resolution or you will tend to fail. Will I the person to buck that trend? Who knows. Hey - if get even half out of my resolutions, that's 50% closer to a better me than I was Dec 31st, 2007.

So where was I? Oh yeah - emotional and spiritual.

3) Gain emotions. Now, that is not to say I have no emotions. My issue(s) come for an inability to really understand them. Whether I am getting angry for no real goo reason to be anger, defensive for no good reason to be defensive, quiet for no good reason to be..... you get the idea. I have a lot in me and a lot to express. Under my hard, candy coated exterior, I am a sea of thoughts, feelings and emotions. I just seem to either stuff them (which tend to cause a pretty nasty explosion when the bag is crammed too full), or I act like it doesn't bother me, which causes me to have to deal with a disappoint, usually in a crappy fashion. So - what in the world am I hoping to do? Well - I think the key is to talk. I need to realize that I am what I am, and if I react a certain way, that's life. The key is to react in a healthy way than in a way that is destructive. Plus - I'm a fun guy. I also have some kewl feelings inside me. They come out often, and that's ok. I just need my fun stuff to be mature a little more often. I think of all my resolutions, this one will be the toughest. Old dog/new trick thing.

4) Hugely spiritual. Too much of my life has been just that - my life. I do what's best for number 1 - me. The thing is, there is so much more that me. Hey - there's 3 more in my house alone. And it grows exponentially from there (I'd do the math, but I left my calculator in my other pants). When I live for me, too many people not only get ignored, but worse, especially with you add 3 & 4 together (feelings and spiritual). No - it's not.....er......7 (told you I forget my calculator) - it's a bad combination when you think of only yourself and stuff your bad emotions. I have lived a fair amount of my life doing and thinking of others, but I think there was always an under lying layer of "me" in there. Time to lose that layer and think of the bigger picture. And that bigger picture is being honest and complete as a Christ-follower. To be the Jeff I need and wish to be, I have to stop being the Jeff I am. Getting there will require more prayer, journaling and exploration of what it is to build a relationship with God.

Ok - that's the deal. The four in a nutshell are: less fat, more cash, cry more and praise louder. Oh man - I could have done this whole resolution post in 9 words. Dangit!