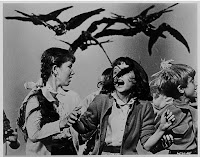 According to this article, PETA got all bent out of shape with how the officials at the All England Club were getting rid of pesky pigeons. So officials bent to the PETA whackjobs and are now using hawks to get rid of the pests. PETA is all bent cuz they claim removing the pigeons was because they are "inconvenient" and not the dirty gross things they are. Has PETA ever seen what pigeons do around the world? These are not pretty animals. They are rats with wings, and beyond unhealthy.

I find that ESPN article pretty ironic. PETA loves to throw around part of their name ("Ethical"), when they are anything but. See, PETA (have you noticed I won't link to them? You'll see why soon enough) doesn't help animals - they kill them. PETA has a large walkin freezer at their headquarters. Why? Well, either they actual like to eat meat, or they need to store cadavers. You can read more about it at this WAY BETTER site about PETA. Or, if you don't mind a few foul words, check out this YouTube video from Penn & Teller.

PETA are hypocrites. They condone the exploitation of animals, that they themselves exploit. They have a horrible record for getting animals into adoptive homes, killing them instead. And many PETA supporters use the very products to survive that they turn around and fight against.

This is a milestone. The first issue we agree upon!

Now, I'm going to ge get me a Polar Bear Sandwich...with some spotted owl sauce.