I ain't putting that in my mouth. 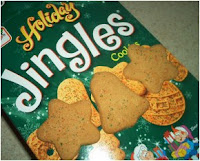 So my wife bought me a box of Jingles the other day for work. I have had them for a few days, and finally broke open the box today. Talk about disappointment. Those dumb elves have no clue how to bake. I guess they must have some baking skills, but no idea about the fine, delectable taste of Jingles. To be blunt - they screwed up BIG TIME! I have had a box of McDonald's cookies that taste better than these abominations. Calling these Jingles is akin to calling Domino's "pizza". I was all prepared for that delicious anise flavored biscuit to crunch and crumble in my mouth with the sweet shot from the crystals of sucrose. Instead, I attempted to stomach this illegitimate outcast from some 4th level of Dante's Hell. Utterly flavorless, unless you consider "crap" a flavor. And what's with the meager sprinkling of sugar? Is there someone who counts out the granules?

Here is a prime example where larger companies buying up smaller companies is a major mistake. Salerno knew what it was doing when it created the Jingles brand many a moon ago, along with it's other major contribution to snackage. Keebler seems to have just wanted the name, and thinks that shoveling dirt in a box marked "Jingles" will sell. Maybe at first you will have buyers, but you cannot change the recipe of a favorite that has been around over half a century. I don't recall hearing a major market fluctuation in the price of anise, so one is baffled as to why those dang dwarfs think they need to change what currently (well, current until the present nauseation that is on the store shelves) has been a great seasonal seller. Interesting enough, Kellogg's sold off the Salerno brand, but kept the name. Morons.

So if you seek the real Jingles, just be on the lookout for a little cookie sold as "Santa's Favorites", under the Salerno brand. I hear you can find them at Target, which curiously is the same thing I would like to put on that stupid elf tree.

My thoughts exactly! All I can say is, yuck!! My dog could bake something better.