Dr. StanleyCup (or how I stopped missing the winning shot and love that I have seen all the championships I care about) 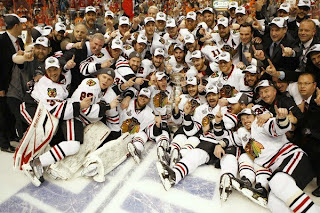 It's been over 40 years for me personally waiting for the above picture. I've been a Hawks fan as long as I can recall. I remember watching weekend games on NBC with Peter Puck and catching games on the radio. It was great fun to watch, but boy - I saw a LOT of mediocre teams over the years on NBC, then SportsChannel, Hawkvision and finally Comcast (road games only, of course). I sat through teams with the unforgettable names on the jersey like Ken Yaremchuk, Rick Vaive, Sergei Krivokrasov, Bernie Nicholls, Christian LaFlamme, Steve Poapst..... and let's just stop there. Blunt talk: we sucked bad.

Skip ahead to Dollar Bill getting old, and while still the owner, I am pretty sure he didn't have much say in what the front office was going to look like, much less what the team makeup was going to be from them. So, after scoring a couple great draft picks, as we as excellent scouting, a few steals over the trade fax - we have the above picture, and the end of years of pain felt by millions that love the Indian Head sweater. And for one of the few times in my life, I actually saw it happen. Not in person, per se, as I have only seen one championship in person. But live on television. My life is now complete, as all the teams I care about have reached the pinnacle of their respective leagues (even if I didn't see it)

1981 Chicago Sting - I was 15, and had just dropped baseball for soccer as my sport of choice. I remember being in a trailer in a campground in Indiana listening to the game on the radio. The game was going to be televised on tape delay, so myself, and others, we forced to listen to it on the radio. For those that don't like watching soccer, I can tell you listening to it stinks! But I heard Rudy Glenn score the winning goal in a shootout (after Ingo Peter missed a wide open header) and I jumped up and down, rocking the trailer in excitement. I would join the team a year later in "public relations" and see them win a 2nd in Toronto in 1984. And by see, I mean hear. Strange - I find out days later if I could have gotten transportation to Toronto, I could have crashed on someone's hotel floor and seen the game in person. Oh well.

1985 Chicago Bears - I'm 29 and still a soccer player. So much a player, in fact, that on Super Bowl Sunday, I have a game to play. While others are watching the Bears kick the ever loving snot out of the Pats, I am running around on Astroturf with a bunch of other guys. I can't recall if we won the soccer match that night. But after a shower and heading home, I watched what really was an afterthought. The game was well out of reach when I tuned in.

1993 Chicago Bulls - This is the game with the infamous Paxson 3 pointer with under 4 seconds to play. And where was I? I was on the other side of a wall. See, we were watching the game at my in-law's house with many of the people I married into. My few months old son got very fussy, and I didn't want to bother everyone. So I got up with him and left, only to hear the huge pop from the room from Paxson's shot. Bulls win. I miss.

1996/1997/1998 Chicago Bulls - I remember watching the 3-peat repeat on television. I think we actually scored some tickets to a regular season Bulls game during on of the championship run years. I remember the flu game, Jud Buechler's 3-pointer, 72-10 and all of Rodman's bad hair decisions - all from my couch.

1998 Chicago Wolves - Here is one of the rare times I actually saw a championship in person. I still don't recall how a bunch of us from my job at the time scored decent tickets at face value, but we sat through a couple periods of hard fought 0-0 score until the Wolves popped in 3 quick ones to put the game away. I remember the players throwing gloves and sticks into the crowd from the bench in the last few seconds, then watching the Turner Cup raised high over Steve Maltais' head.

1998 Chicago Fire - I really don't remember why I was not following the Fire as closer as I should. Something in my life, I am sure, had me away from where I should have been. But the Fire pulled out a win in their first season and held the MLS trophy high.

2005 Chicago White Sox - Here was one of the two last championships I needed to happen during my life. I grew up in the south burbs of Chicago. By birth, you picked your side of town baseball-wise. The Sox were (and somehow, still are) 2nd in the Second City. But in 2005, we went wire to wire and dominated MLB. I had returned to my love of baseball (still love soccer) in the mid 90's, so I watched every game I could, including the dang near all-nighter game 3. When the Sox are one out away, I get called out of the room to help my daughter with a quick math problem. From the other room, I hear my son hooting the game is over. Thank goodness for replay. Again...

2010 Chicago Blackhawks - And the circle is complete. Last night, the final team I followed for years ended their drought. I, like everyone else, had no dang clue where that puck went. But Kaner knew, and that's all that matters now. My wife was on the computer. My son was watching from his friend's house. My daughter just walked into the room when we were all trying to figure out where the puck went. I was just hoping they were not celebrating early. And they weren't.

So that's it, sports-wise. All the teams that matter to me have won the ultimate prize. They are all welcome to win it again, but no other Chicago team matters in my life. Yeah....I'm talking about you losers.