How about a little gratitude??? 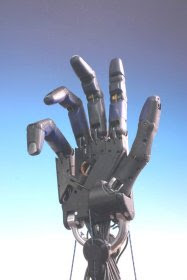 Now, I seem to recall a hearing that a Seinfeld episode talked about this very subject, but let me say up front that I was never into that show. I can't even watch the reruns. I have probably seen all of ten episodes, and I just don't find the amazing humor that is Jerry, George, Elaine and Kramer. Then again, I thought Paycheck was a pretty dang good movie.

However, what in the world has happened to the courtesy wave? Has it become that impossible to show a little appreciation for kindness? Now, the rampant disappearance of this endangered species won't stop me from being thoughtful to my fellow motorist. In fact, being nice actually speeds up my commute, so you can think of this as me really doing it just for myself. However, why can't someone acknowledge your actions and show a little love to you with a simple hand swaying? If you have this whole 2/10 hand position fear, remember you are probably traveling at under 5 MPH when you merge, so I don't think you will be crashing any time soon, Jeff Gordon. And waving won't get me pulling out a gun for I think you are flashing some rival gang sign at me. And I am fairly certain I passed far enough through math class to discern the difference between a 5 fingered expression of gratefulness and a single finger symbol of displeasure.

Amen, JediJeff. Few things piss me off more than the absence of a courtesy wave. Often, I will wave sarcastically at them, although I don't think they've ever seen it. It makes me feel better, though.