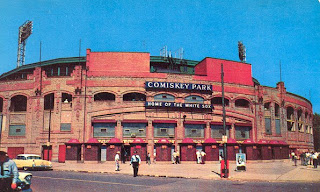 Last night was the last baseball game in Yankee Stadium. Yanks are all but eliminated from the post season, so the House that Ruth built saw it's last action last night. I never visited the park - just saw it from the Empire State Building, but I wish I could have been there just once. Add it to my other misses - the Boston Garden, Montreal Forum, Tiger Stadium, Astrodome, Maple Leaf Gardens, and a host of other arenas.

Last night, during the telecast on ESPN, a bunch of old timers visited the booth to share stories of Yankee Stadium. I thought "the heck with play-by-play...just tell stories all game!!". The part that was the best occured with Whitey Ford and Yogi Berra going through old times. Oh - for an hour alone with them to tell about the good ol' days of the game. Of all the talk about past Yankee greats, their time ended with this fantastic Yogi story/quote, that actually occured at Comiskey Park. As Yogi told it:

Whitey was on the mound against the White Sox. First pitch of the game, Luis Aparicio smacked a double. Nellie Fox followed by laying down a bunt on the first pitch and beating it out to first. The first pitch to the next batter, Minnie Minosa, hit him in the neck, loading the bases. Ted Kluszewski took the first offering he saw out over the fence for a grand slam. Manager Casey Stengel comes out to the mound to talk to his pitcher and asks Yogi "Does Whitey have any stuff tonight?" to which Yogi replied:

"How the hell would I know. I haven't caught a ball yet."